There has been a Church in Dittisham for more than a thousand years as it is assumed there was a Saxon one, though no trace of it now remains. But in the year 755 Devon was conquered by the Saxons and a Saxon Chief settled on the banks of the River Dart. This settlement was part of the manor given by Edward the Confessor to Leofric, Bishop of Exeter, who is certain to made sure there was a Church in the settlement. This Church was replaced by a Norman Church consisting of only a Chancel and Nave; the line of this roof can still be seen on the east wall of the Tower. In 1328 Bishop Grandisson of Exeter ordered an enquiry into the neglect of duties and of the Church, which was now a ruin, by the Rector, Sir Richard de Inkpenne who died soon afterwards. 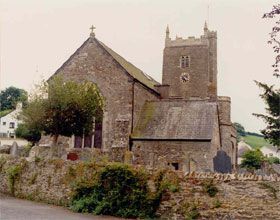 The Church was restored and reconstructed between 1328 and 1333 by the Rector, Sir Richard de Gormersale, the chancel being enlarged and the side aisles added. The Church was reopened and dedicated to St. George by Bishop Grandisson on the 4th October 1333.

A porch was built on to the south wall with a Priest’s Chamber above which has a window into the Church over the south door. There is also the Royal Coat of Arms of Charles II over this door, granted at the time of the Restoration in gratitude to the people of Dittisham for their loyalty. Alongside the south door is a Holy Water Stoup in Gothic style replacing the much older one. The Font is Norman standing on a modern stone shaft and base. It is a solid, red sandstone bowl thought to have been buried to save it from destruction Cromwell’s time. The font cover is modern and was given by the Children of the Parish in 1928. The beautiful carved and painted stone Wineglass Pulpit dates from the 15th Century. The figures are thought to be of the Saints, including St. John the Baptist. The screen is also 15th Century – the groining and canopy were beautifully restored in 1954-55 by workmen in Exeter. The painted figures were damaged by Cromwell’s men who also burnt down the Rectory and so all the books and early Church Registers were destroyed. The Reredos behind the Alter was erected in 1933 and shows Bishop Leofric, first Bishop of Exeter, St. George, St. Peter, the Virgin Mary and child, St. John the Devine, St. Paul, St. Andrew and Bishop Grandisson.

The Hatchment in the Tower is a funeral Escutcheon of an old parishioner called Narracot whose Coat of Arms dates back to the 14th Century. The windows in the North Aisle were inserted in about 1846, they are a memorial to two former Rectors, John Hutchings (1768 to 1802) and his son, Robert Sparke Hutchings (1805 to 1827). The windows in the South Aisle  are of pressed glass which is now not made. The small, richly coloured window in the North Side Chapel may consist of remains from the original East Window. The Choir Stalls and Altar Rails are modern, also the Statue of St. George over the inner door in the porch, and the heads of the Queen and Prince Charles on the outside of the West Window. On the 4th October 1933, the 600th Anniversary of the Restoration of the Church, the Reredos, the Font Cover, Altar Rails, Choir Stalls, Altar Cross and Patronal Banner were dedicated by the Bishop of Crediton.

A list of names on the Porch shows who have been Rectors since 1224, but in 1982 St. George’s was no longer able to have a rector of its own and is now part of the Benefice of Dartmouth and Dittisham